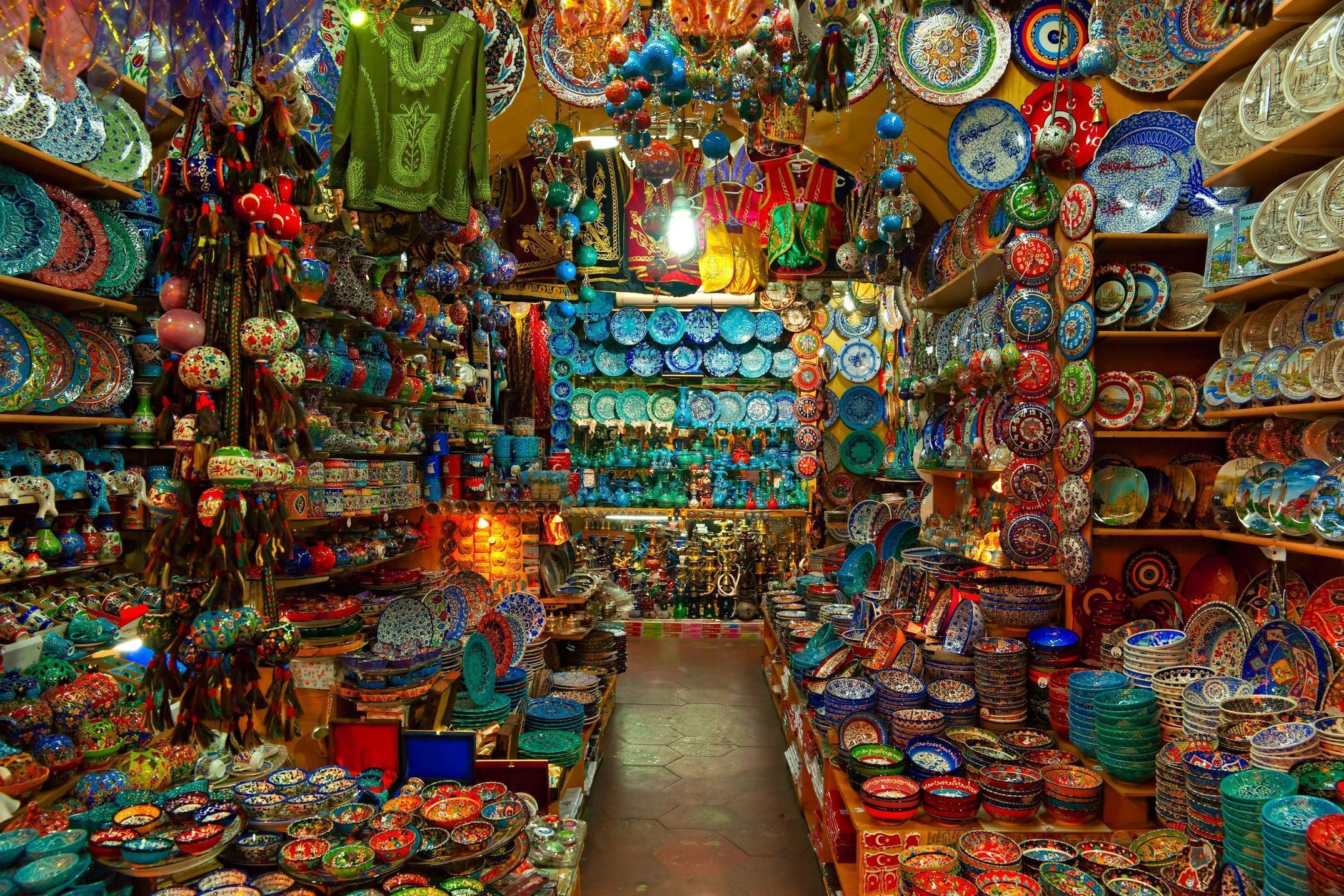 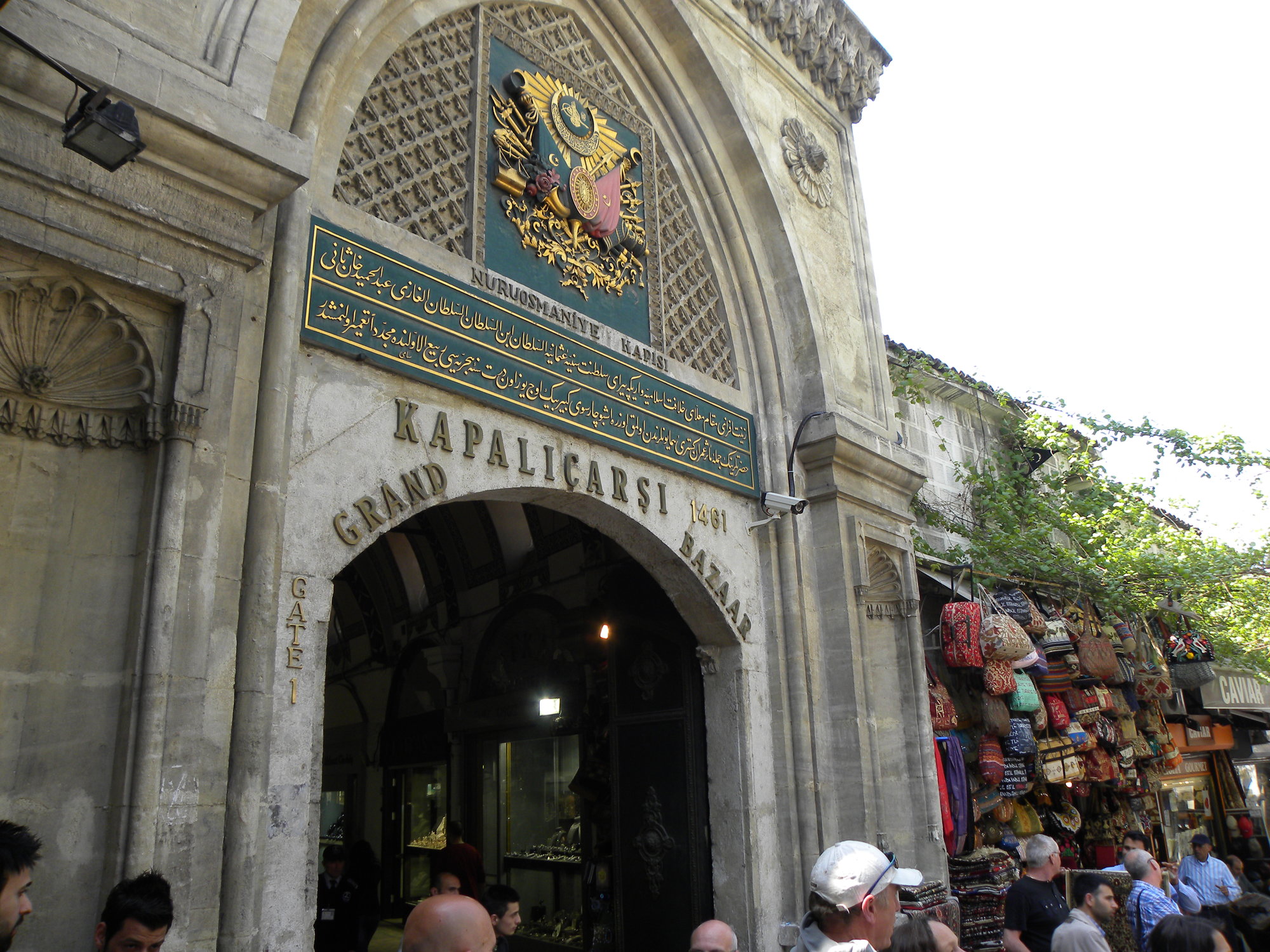 Istanbul is an old city that has witnessed the history itself for centuries with every civilization that came and stayed until the end of its time. But Istanbul stayed where it was all along. This rich history still lurks in the city as it keeps growing and witnessing the contemporary times. Grand Bazaar is one of the most important and famous structures that is left from the days of the past.

Grand Bazaar is known to be the largest covered shopping center in the entire world with 61 streets and around 4.000 shops. There is no limit to what you can find or discover in these streets as you wander around while smelling all that has been lived between the walls of the Grand Bazaar since the day it was built.

THE HISTORY OF THE GRAND BAZAAR 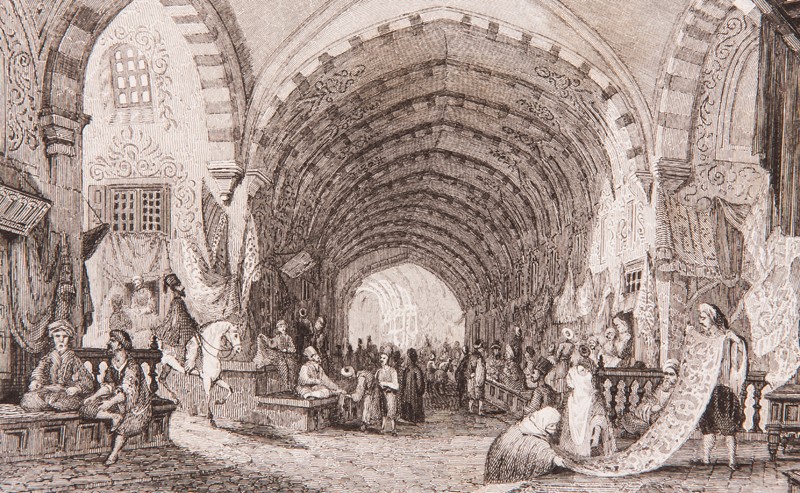 Istanbul was conquered by Sultan Mehmet II in 1453 which earned him the title “Conqueror”. After the city was taken over by the Ottomans, with Istanbul being the trade center of the world for centuries to come, Sultan Mehmet II ordered the core of the Grand Bazaar to be built in 1455 which was then called the Bedesten, meaning the bazaar of those who sell cloth. The plan of the Sultan was to improve the economy of the Ottoman Empire after the conquest. The building of the Bedesten was done in 1461.

Over the following years, there were other bazaars built and added to the initial structure such as the second-hand market also known as “Bit Pazarı” in Turkish and the Long Market. Sultan Mehmet II ordered another bazaar to be built to the north of the original one which was called “Sandal Bedesten”. Nowadays, the original structure is referred to as “Internal” or “Old” Bedesten, while the one that was built after is called “External” or “New” Bedesten. In the New Bedesten fabrics such as silk were being sold while in the Old Bedesten luxurious items such as jewelry and crystals were sold. Even though at the beginning these two bazaars were separate from each other, in time, with new stalls and shops being opened in between and around them, the two bazaars became one. In the 17th century, it reached its shape that we know today.

The Grand Bazaar was a unique one in Europe with all the high-quality goods being sold only in here. The Grand Bazaar was not only unique due to the high-quality goods but also due to its etiquette in the days of the Ottoman Empire era. The understanding of trade was quite different from the Western understanding. With the effect of Islam being present, the sellers were not interested in profit, there would only be one and true price for each item, the sellers would be happy for other sellers’ success. However, after the Ottoman Empire fell and the Republic of Turkey was established, the society adopted many Western qualities which changed the understanding of ethical trade.

THE LOCATION OF THE GRAND BAZAAR AND HOW TO GO THERE 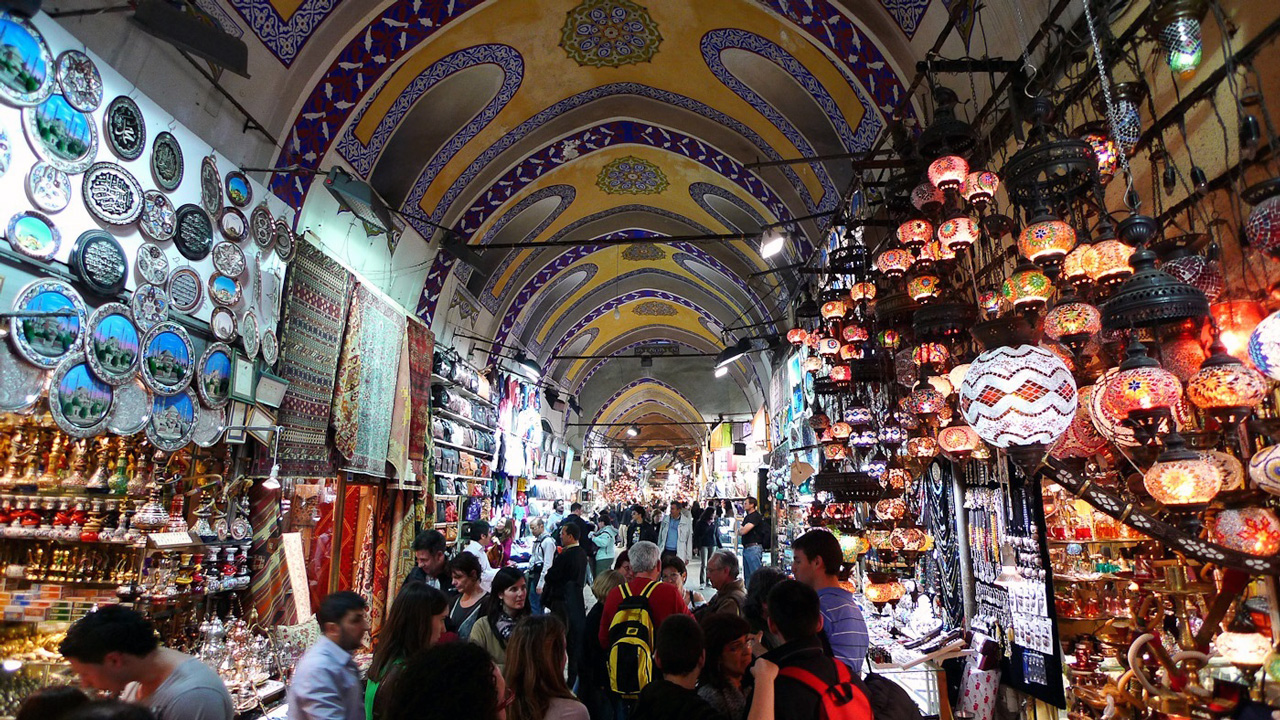 The Grand Bazaar is located in the Beyazıt district of Istanbul. You can easily reach the Grand Bazaar using the tram. If you have to use the metro first, then you can always transfer to the tramline at certain stations. Take the T1 tramline and get off at the Beyazıt station. From there, cross the main road, go toward the left and walk until you see the Grand Bazaar entrance to your right. It should take less than 5 minutes for you to reach the bazaar.

Reaching the Grand Bazaar may be easy but navigating inside the bazaar itself is a different challenge. You will notice that, similar to the Ottoman Empire era's understanding of separating where the goods are sold, different items are sold in different streets. If you entered from the main and the most common entrance, you will realize that there are only jewelry shops throughout that particular street. And if you take the left, you will realize that only carpets are sold in that street. You should take your time, get a little lost and find your way back out in this historic place in order to truly experience its beauty and charm. Let the history and your instincts guide you.

THE TRADITIONAL WAY OF SHOPPING

Believe it or not, there are certain things you need to know before going into the Grand Bazaar. Shopping here is a completely different experience than shopping at a mall.

Do not be afraid to chat with the seller because they will be willing to chat with you! The sellers in the Grand Bazaar are very friendly and they can speak a lot of languages. Even if you will not end up buying their products, they will probably offer you Turkish tea or coffee to show hospitality. Do not be afraid of accepting the offer.

If you are going into antique shops or any shop that sells products that have a long history, the shop seller usually a person of great knowledge in the field. They will tell you all about the history of that product, how its made, when its made or even whom it is made by. Sometimes it is a good idea to learn the history not by strictly reading about it from the books or the internet, like you are doing now, but to learn it by talking to the locals who have crazy stories to tell of their ancestors and history.

When you like a product, even if the price is not that high, do not forget to bargain and do not be shy to bargain in the Grand Bazaar. It is almost like an unspoken, unwritten rule that applies in this place. If you bargain with the seller, it will quickly become somewhat of a game between you two and you will get good discount afterwords. That is what I call a win-win.

Sometimes you may be interested in a product and you may have spent a good amount of time talking to the seller, however, you do not have to buy it. If you end up deciding not to buy the product, you can just walk away and it is completely okay.

WHAT TO LOOK OUT FOR 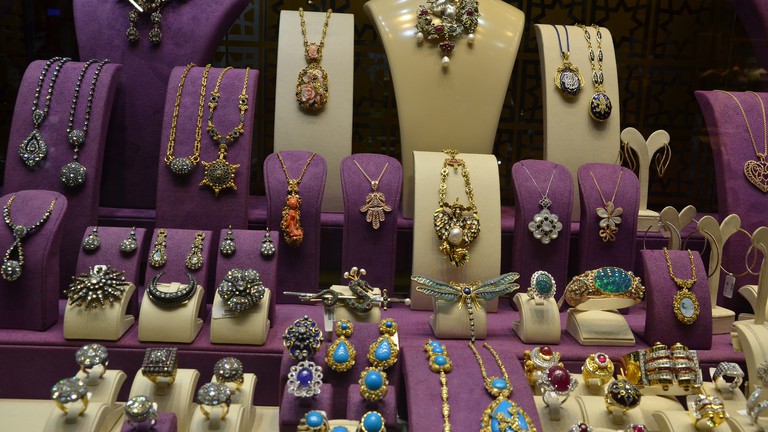 You can find all sorts of fine jewelry in the Grand Bazaar from silver to gold, anything you may need. While there are modern and minimalistic designs, you can also find the traditional Turkish and Ottoman designs with luxurious stones like diamond, emerald or ruby in these jewelry shops. There are both high-end and budget-friendly shops. Depending on your personal budget, you can find the right one for you as there are endless options to choose from. 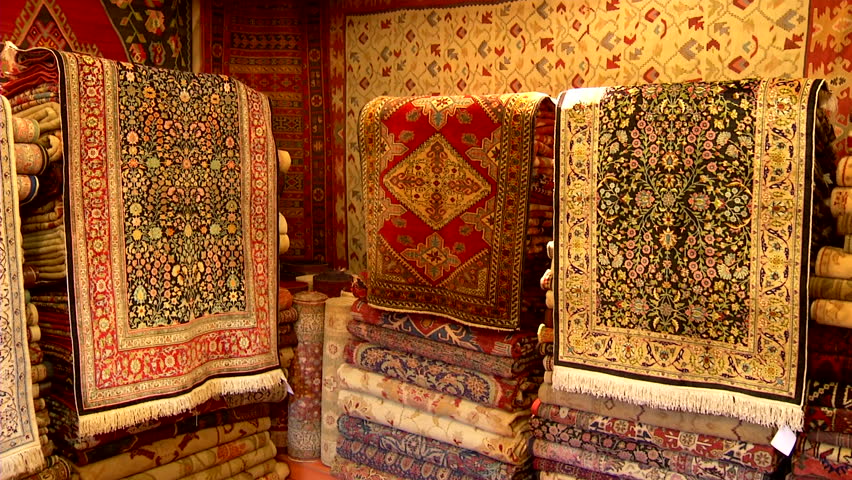 The Turkish carpet is world-renowned. Due to being handwoven with silk or wool, these carpets have been a source of attraction for centuries. Even though there are mass-produced rugs in the bazaar, there are also shops that sell hand-woven carpets or even antique ones. Sisko Osman is the most famous antique carpet seller in the Grand Bazaar if you are interested in getting a rug that has a rich and long history. He is known to be a man who knows a lot about the history of the carpets. 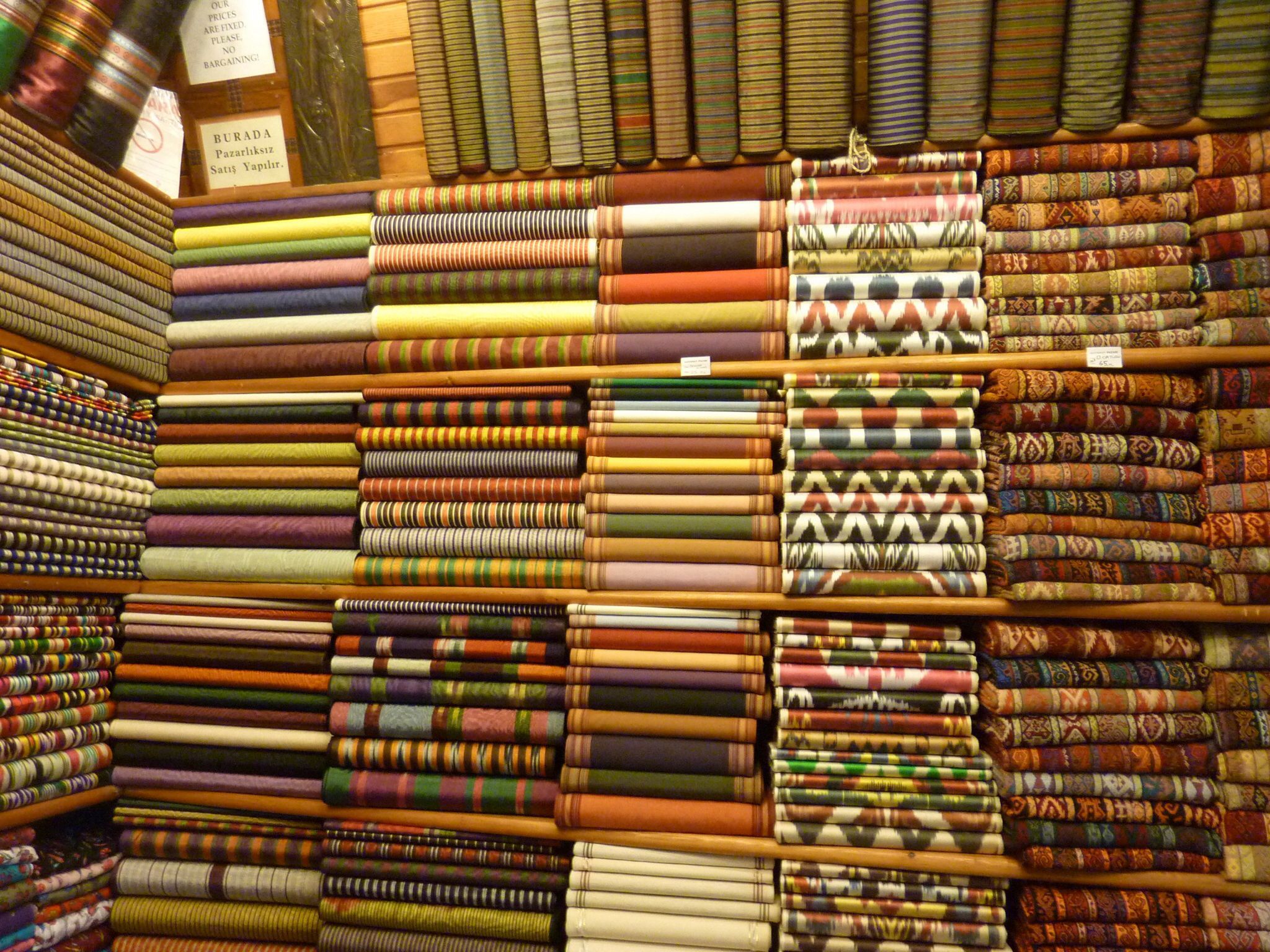 Fabrics were one of the most important trade goods in the Ottoman Empire. Similarly, today, there are many textile shops in the bazaar. You can find all sorts of fabrics from cheap to expensive, from cotton to silk, anything and everything is right here. 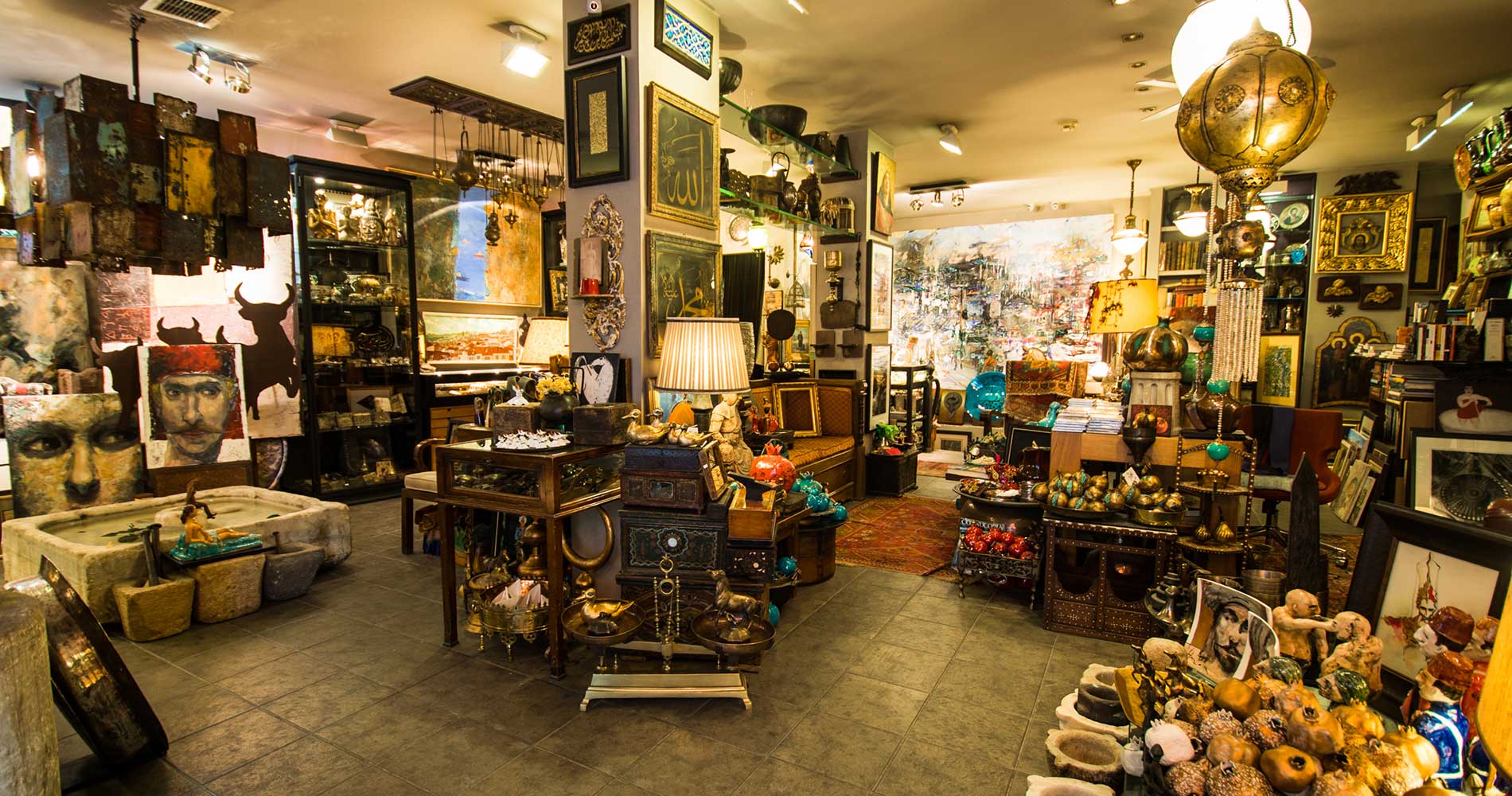 Antique shops are always a fun way to explore the history of the place you are visiting. If you are a collector, there are amazing shops that sell unique items in the Grand Bazaar. You can also simply lose yourself in the living history just for the sake of it. 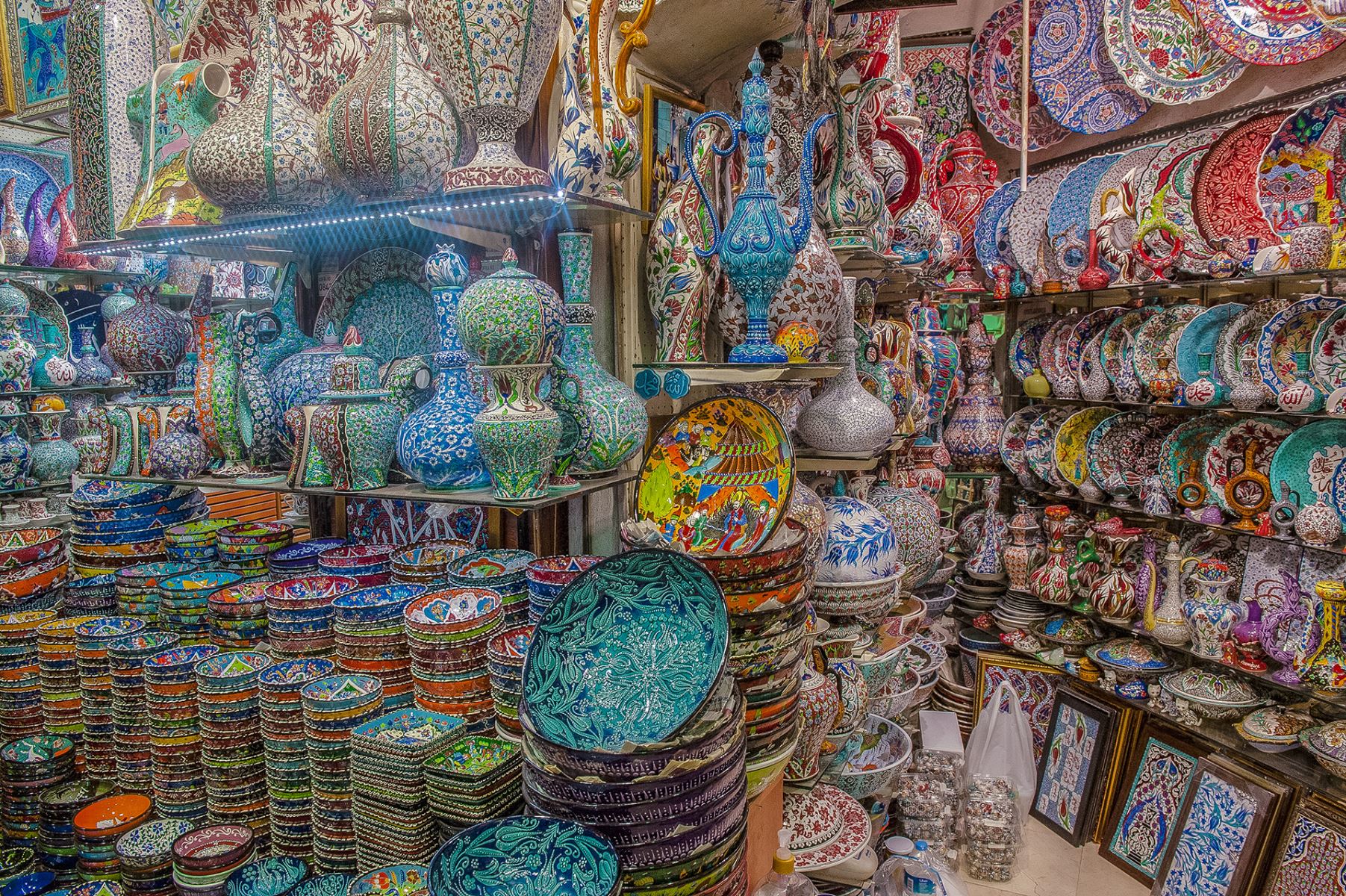 Ceramics with Turkish and Ottoman styles are quite famous in Turkey. Most of these ceramics are handmade with blue and red paint. They come in all shapes and sizes, which could be perfect gifts for family and friends as well as great decor objects for your house. 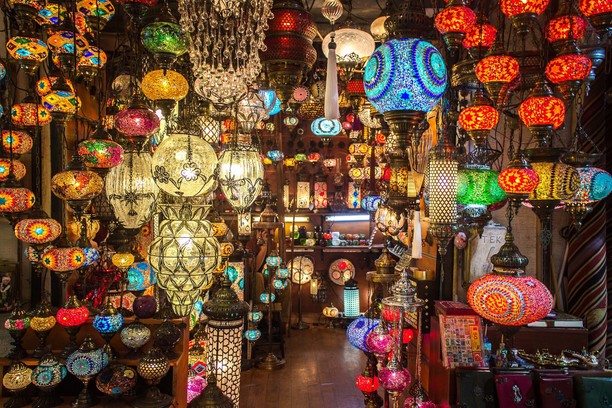 The lanterns sold in the Grand Bazaar look absolutely magical. These lanterns designed with colorful glasses in the traditional style. The light shining through those little colorful glasses look stunning and give off a different vibe. 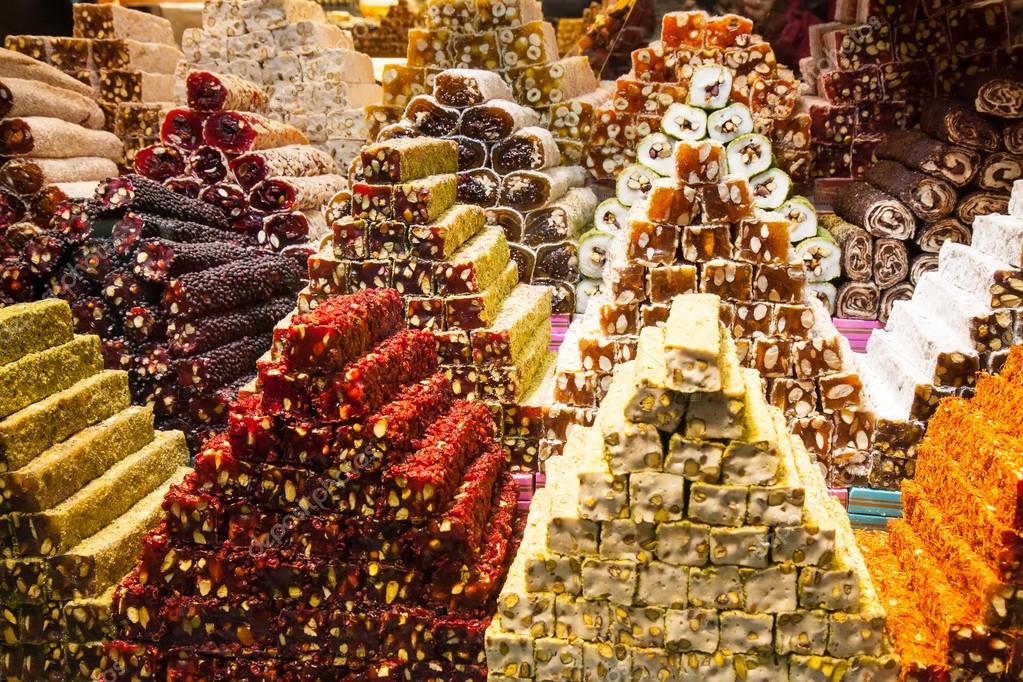 In the Grand Bazaar, there are many shops where you can find Turkish sweets and desserts. The most famous sweet sold here is the Turkish Delight. You will be amazed by the colors and the flavors of these sweets. The shop sellers may offer you some to try out. Do not feel forced to buy them but it is hard to believe that you will not buy them after tasting how good they are!