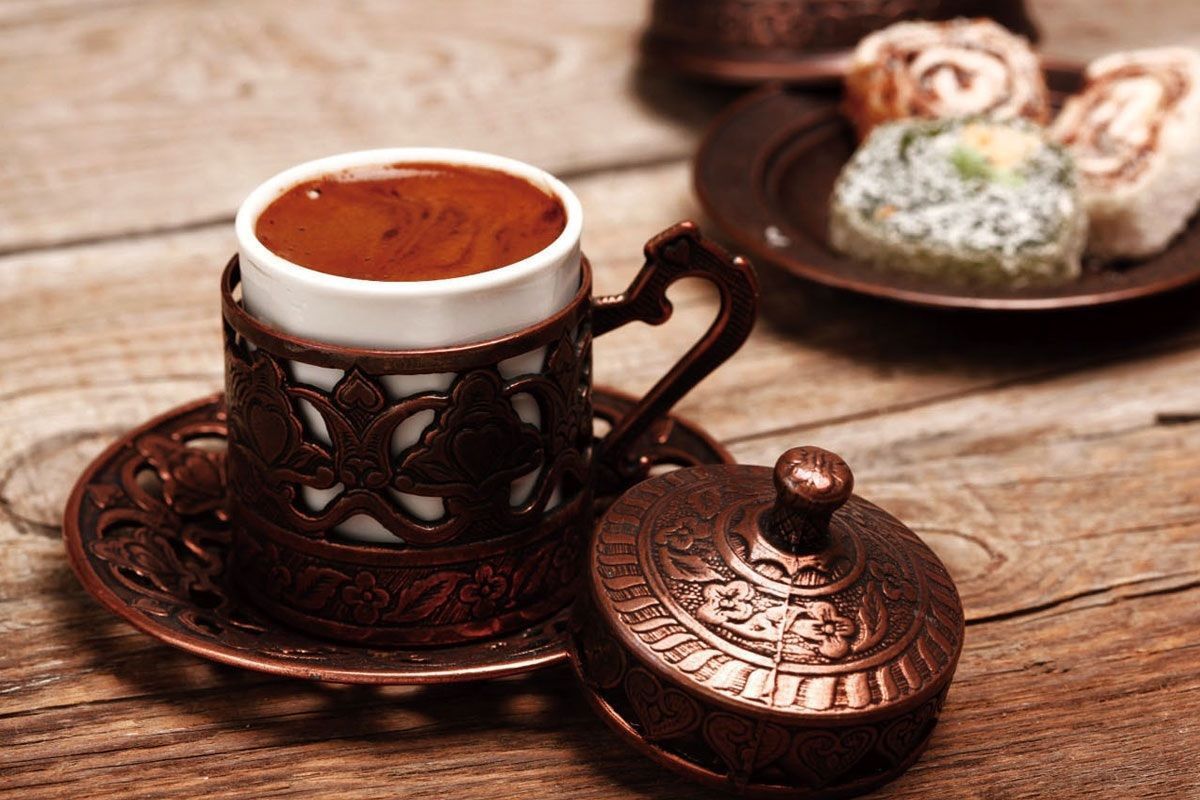 What You Need To Know About Turkish Customs And Traditions

Turkish culture is one of the complex and interesting cultures in the world that is worth exploring. Whether you are learning about the different cultures or planning a trip to Turkey, this comprehensive guide is the perfect place to get to know the culture and its customs.

Breakfast is a fundamental part of the day and the Turks have a whole culture dedicated to it. Breakfast is not something you can get it done with cereals of fruit in Turkey. It includes bread, cheese, olives, eggs, a salad made with tomatoes and cucumbers, jam, honey and butter. Bread is probably the most important of them all, as the Turks always have bread with their meals and they have huge respect for it. During the weekends, the breakfast gets even richer with things like soudjouk, sausage and pastrami. Menemen, a dish made with tomato sauce, green pepper and scrambled eggs, is also another much-loved food eaten during breakfast.

Turkish dinners always make one stuffed until you can’t eat anymore. As they are also generous with their portions, they love to cook many different types of food for dinner. The dinner usually starts with soup, continues with a dish with meat and vegetables along with rice and a dish prepared with olive oil that is usually eaten cold. The dinner usually ends with dessert. However, eating does not stop after dinner. They continue to eat nuts and fruit after dinner while watching tv or having conversations. Of course, they also drink black tea along with it.

Tea is drunk in Turkey all the time and I mean all the time. During the breakfast, afternoon and even after dinner, Turks drink black tea. They also immediately offer tea to their visitors even during formal interviews. It is a  good idea not to say no when you are offered tea as Turks love to share and their tea is an important part of their day. It should also be mentioned that Turks drink tea without any additions like milk. 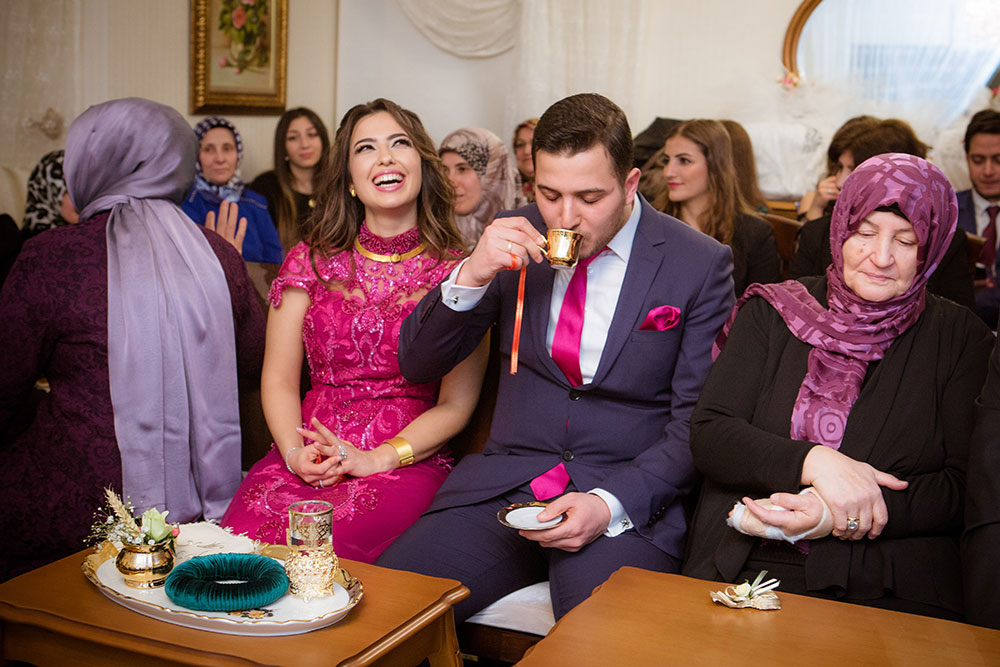 Even though couples do propose to each other and decide to get married, there is a custom to be followed in the Turkish culture. After the couple decides that their relationship is serious and they want to get married, the families get involved. The soon-to-be groom visits the soon-to-be bride’s family’s house with his family on a decided night. They bring flowers, chocolate and desserts along with the engagement rings if they decided to have the engagement ceremony on the same night.

After both families sit down and get to know each other, the bride-to-be prepares Turkish coffee for everyone. In the old days where arranged marriages were common, if the woman did not want to get married to the man, she would put salt in his coffee to signal that she refuses to marry him. However, nowadays this tradition changed and the women started to put salt in the men’s coffee no matter what, just to have fun. 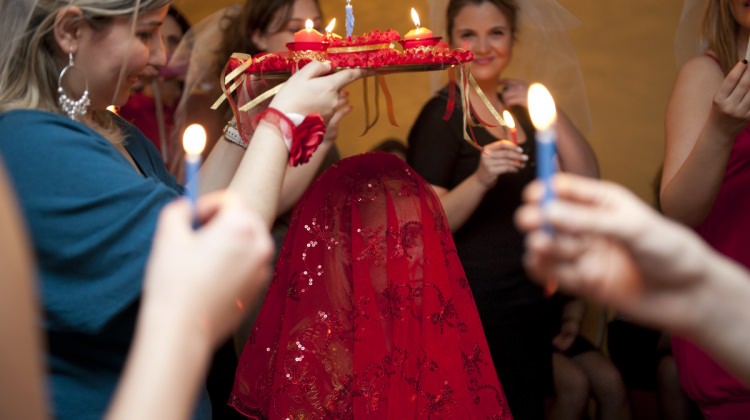 The night starts with music. Traditional Turkish music is usually chosen and traditional dances are performed among women. After a while, the actual henna part starts. The bride is sat on a chair. A red veil is put on her head. the lights are dimmed. The young girls light candles and start to turn around the bride while singing a traditional song about the bride leaving her family and missing them. During the singing of the song, the bride is expected to cry due to leaving her family, however, not all of them cry.

Henna night is an old tradition to bless the marriage of the couple and protect them from any harm and a way to wish them a happy marriage. Nowadays, some people prefer a modernized version of henna nights similar to bachelorette parties with modern music and no henna. However, the traditional henna night is still loved and preferred by many.

Wedding ceremonies are always very colorful in Turkey as they have many different traditions. The ceremony starts on the road. The bride is taken from her house by the groom accompanied by shawm and drum playing traditional Turkish music for all the relatives to dance to while waiting for the bride to come out. When going to the place where the ceremony will take place, they continue to play music as they form a long car queue and they tend to sound the horns all along the way.

Once they arrive, the civil marriage ceremony takes place and then the dancing starts. All night long, everybody dances to the traditional Turkish songs. Towards the end of the night, a different custom takes place. All the relatives of the bride and groom give them jewelry, gold or money as gifts. This is a way for them to support the newlywed couple to pay their debt or go on a honeymoon.

The wedding ceremonies may change according to which part of the country the family is from. Some couples prefer simple wedding ceremonies without much dancing. Instead of dancing all night, they host a dinner for all. Also, some religious families may skip the dancing part and instead host a night where a sermon and Quran recitation takes place to bless the marriage. 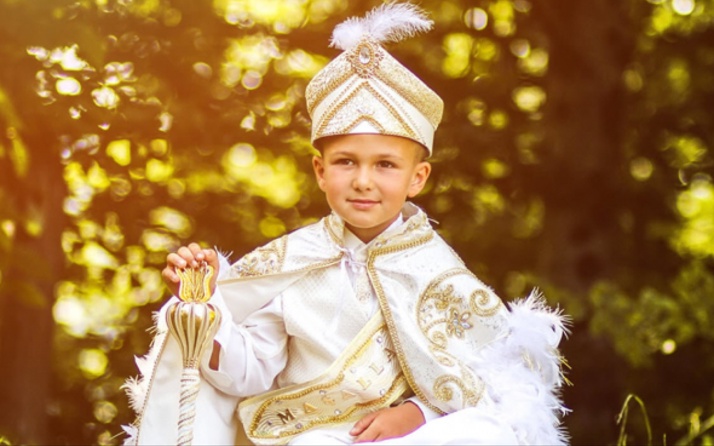 Circumcision is an important ceremony for the boys in Turkish culture. Coming from Islamic traditions, circumcision is still performed today. Compared to the old days, it has become a lot safer since it is done by the doctors in the hospitals. Some families prefer their sons to be circumcised when they are between 5 and 12 years old while some prefer it to be done soon after the baby is born.

Depending on the preference of the family, a Quran recitation may take place or they may start playing music and dancing. All the invited family members and friends congratulate the boy, give him gifts and toys as well as money or gold.

RESPECT FOR THE ELDERLY 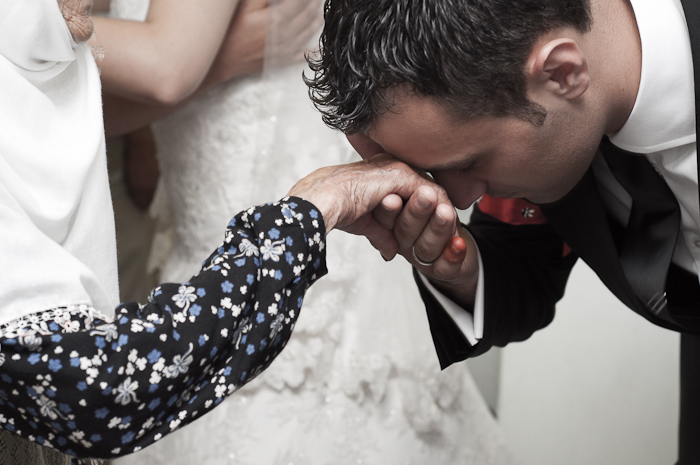 The Turks have enormous respect for the elderly. It is not appreciated to put the elderly in nursing homes but their children are expected to take care of them. During the important days such as “bayrams”, the Turks visit the elderly and anyone younger from them kiss the hand of the elderly and put it to their forehead as a gesture of respect. Do not be surprised if you see strangers helping the elderly to carry their groceries or help them cross the street. Even on the bus, young people are expected to give their seats to the elderly to sit. Not doing so is considered rude.

Turkish people love giving gifts. If someone has just moved or got married or has accomplished something, their loved ones tend to give them gifts as a part of the celebration. Especially when visiting someone’s house, they always bring in something. Whether it is a box of chocolate or baklava, or a cake, or a decorative object for the house, they do not go into the houses they are invited empty-handed. If you are visiting a friend in Turkey, bring them a small gift. They will be both surprised and happy to see you know about their traditions.

Turks do not enter their homes with shoes on. Shoes are considered dirty, therefore coming from the Islamic tradition, one cannot pray somewhere dirty. This tradition still continues today. When visiting a Turkish home, take your shoes off before entering the house. They will immediately give you some slippers to wear in the house.

Women lightly shake hands if they are meeting each other for the first time. However, if they are friends or know each other well, they tend to hug and kiss each other on the cheek.

The greeting between women and men may change from person to person. If both parties don’t know each other they lightly shake hands. If they know each other well they may touch their cheeks together while giving a handshake or a half hug.

Sometimes women or men do not want to shake hands due to their religious beliefs. In this case, it is best to wait for a sign from the person. If they do not offer their hand, then simply nod your hand lightly and smile as a form of greeting.

Sharing is an extremely important part of Turkish culture. They love offering food or drink to the people around them. They always share their food with their neighbors, they bring food to the elderly or the ill people that they know. Similarly, many restaurants or cafes share their extra food with stray cats and dogs. Butcher shops always have cats and dogs around them because they share the extra meat with them.

Neighbors are not much different than family to the Turks. They always visit each other and share their food with them. It is very common for a Turkish woman to bake a cake and immediately share it with her neighbor thinking that the neighbor must have smelled the baked cake and craved it. The neighbors are always invited to important events like a wedding or circumcision ceremonies.

If a neighbor is somehow in need, they do everything in their power to help them. There are many incidents of neighbors saving each other from house fire or gas leak. They ask their neighbors to take care of their pets, plants or even children when going away for a while. Therefore, it is safe to say that the Turks trust their neighbors and see them as family.

There are some things that you should be aware of about etiquette in Turkey. Being drunk in public or drinking in public such as squares or public transportation is not a welcomed behavior.

Kissing or making out with your partner is also considered private and is not always welcomed among the Turkish people. If you do so, you may be warned by them.

There are many expressions unique to the Turkish tradition. When entering a store or a house, you will always hear them say “hoşgeldin” or “hoşgeldiniz” which simply means welcome. Turks answer this by saying “hoşbulduk” or “hoşbuldum” which indicates that you feel welcomed and you are happy to be there. You could also simply say “teşekkürler” as a response if you want to say thanks.

Turks also have some expressions that have no corresponding expression in English. If they see someone working on something or if they are going into a store or leaving a workplace, they say “kolay gelsin”. This is a way of saying “may it be easy”, wishing whatever the person is doing may become easy for them.

You may also hear Turks saying “Allah’a emanet ol” while saying goodbye to someone. This roughly translates into something like “may God protect you” or more simply “God bless you”.

In Turkey, personal space is lesser than the European countries as Turks love close contact. People usually have conversations from a close distance and they may touch your arm or pat you lightly on the back during the conversation. You can also see women walk hand in hand or men putting their arms on each other. However, the opposite genders do not come into close contact unless they are in a romantic relationship. The Turkish people may also want to kiss you on the cheek and hug you as a part of their culture. Do not be alarmed as it is a way for them to show affection and love.